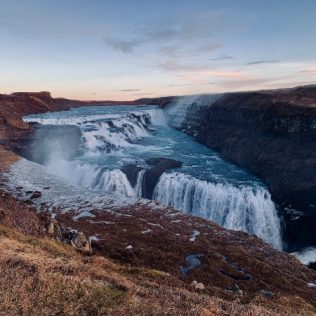 The 12 Best Waterfalls in Iceland

The waterfalls in Iceland are truly incredible. Each comes with its own distinct character, dazzling visitors with its astonishing size, sound, and stunning natural features.

No trip to Iceland will be complete without exploring its majestic waterfalls. You can stand atop and marvel at the breathtaking views from some of these waterfalls, whilst others offer the chance to explore past their watery curtain and into the secret caves hiding behind.

There are a whopping 10,000 waterfalls in Iceland scattered across the country. Fed by the abundant glacial rivers combined with snow and rain, the waterfalls of Iceland are a must-see on your visit to the country.

But with so many waterfalls to choose from, it can be tricky to plan your trip to visit these natural features. For your convenience, we’ve rounded up a list of the best waterfalls in Iceland. So, get your bags ready, and make sure you include these on your itinerary.

Gullfoss is one of the most famous waterfalls in Iceland. Located in the Hvítá river canyon of Southwest Iceland, this waterfall can be reached within two hours’ drive from Reykjavík.

The water in this waterfall comes from the Hvítá river and travels from the Langjökull glacier before cascading at 32 meters down in two stages, showcasing a dramatic water show display. The first stage of Gullfoss is shorter, cascading at 11 metres, while the second stage drops to 21 metres.

On both sides of the waterfall, there are canyon walls about 70 metres tall, descending into the Gullfossgjúfur canyon. According to geologists, this canyon was formed due to glacial outbursts during the last century.

During summer, about 140 cubic metres of water surges down the Gullfoss waterfall every second, so don’t be surprised if you find yourself drenched by the water’s mighty spray if you get too close.

In South Iceland, you will find Seljalandsfoss, one of the country’s best-known waterfalls. If you’re visiting the south coast, you should make a stop at this stunning attraction.

As part of the river Seljalandsá, the Seljalandsfoss waterfall has its origins underneath the Eyjafjallajökull glacier. The volcano behind the ice cap famously erupted in 2010 and wreaked havoc at airports around Europe.

With freezing water cascading at 60 metres, the Seljalandsfoss waterfall is breathtakingly beautiful. There’s a path that will take you behind the waterfall, but make sure you bring a raincoat with you, or you’ll get soaking wet from its drizzle.

Seljalandsfoss’ water cascade is relatively narrow, but it falls from a tall cliff that used to mark the country’s coastline. After spending some time at this spot, visitors can then head north to the Gljúfrabúi waterfall, which is partially hidden behind a rock face.

Skógafoss is an Icelandic waterfall that is undoubtedly truly worth a stop on your visit to South Iceland. What makes Skogafoss unique is that its water comes directly from two glaciers, the Myrdalsjokull and Eyjafjallajokull glaciers. Cascading at 60 metres, the heavy veil of the Skogafoss waterfall is truly impressive, and if you walk close enough, you’ll be enveloped by a cloud of water spray.

Skogafoss waterfall is part of the Golden Circle route along with Seljalandfoss. It offers excellent photo opportunities, especially during winter when the Northern Lights appear across the sky. If you are brave enough to climb the 370 steps that will take you to the top of the waterfall, you’ll be treated to the most mesmerising views of the South Iceland coastline.

Dettifoss is considered the most powerful waterfall in Europe and the most voluminous Icelandic waterfall. Located in the Northeast, it draws huge crowds of tourists each year and has lived up to expectations.

At 45 metres high and 100 metres wide, Dettifoss is one of the sites that make up the famous Diamond Circle of North Iceland, along with Ásbyrgi Canyon, Húsavík, and Lake Mývatn. While the Goðafoss waterfall is often referred to as ‘The Beauty’, Dettifoss is called ‘The Beast’ because it’s more famous for its power instead of appearance.

Nevertheless, this powerful waterfall looks very stunning. It’s extremely large, and it produces mists that are visible even from several miles away, with rainbows forming within it. If you get a lot closer, you can hear the mighty roar of the waterfall, which makes the experience even more exciting.

Set in the river Skjálfandafljót, one of the largest rivers in Iceland, Goðafoss waterfall is one of the top waterfalls in Iceland due to its spectacular cascade of water. Falling from the height of 12 metres with a width of 30 metres, it’s truly worth visiting if you happen to explore the northern part of the country.

What makes this waterfall even more interesting is its history. When Iceland adopted Christianity, legend has it that the speaker of the Icelandic Parliament threw his pagan idols into the water here. Because of this, it was given the name ‘Goðafoss’, which means ‘Waterfall of the Gods’.

The best way to reach the Goðafoss waterfall is by car. It’s a quick 30-min drive from the town of Akureyri, and a great place to put on your self-drive tour itinerary.

Hraunfossar is in the Borgarfjörður district of West Iceland. Its name translates to ‘Lava Falls’ in English since the water streams from the Hallmundarhraun lava field. The lava field that the waterfall trickles through was formed because of an eruption of one of the volcanoes underneath the nearby Langjökull glacier, the second largest ice cap in the country.

Since the area around Hraunfossar used to be a site of constant volcanic eruptions, the lava fields have hidden caves. Iceland’s longest cave, Víðgelmir, is located close to the waterfall.

Another famous attraction close to Hraunfossar is the Barnafoss waterfall. It’s only a short walk away and cascades beautifully into a narrow, rocky valley.

Svartifoss is one of the most famous waterfalls in Iceland that every visitor to the country should see. It’s located within the Skaftafell nature reserve part of the Vatnajökull National Park.

At 20 metres tall, Svartifoss is an incredibly elegant waterfall, with black columnar basalt formations beautifully framing it. The waterfall looks like a big heart from afar, making it one of the most romantic places to visit in the country.

Glymur Waterfall is one of the tallest waterfalls in Iceland and can be reached if you’re prepared for a hike. Along the way, you’ll come across a cave, river crossings, and several other stunning views surrounding the waterfall.

Located just outside Reykjavik, Glymur is a perfect combination of adventure and beauty. Descending gracefully at 200 metres and dropping into a massive canyon surrounded by lush green moss, the waterfall looks and sounds incredibly impressive.

As the second tallest waterfall in Iceland, Glymur is a must-see during your trip to the country. When they built a tunnel under the Hvalfjordur fjord, many visitors started to bypass it when visiting the waterfall. It’s well worth a stop however, as the fjord looks very stunning, surrounded by lush forests and tall mountains.

Háifoss is one of the most famous and beautiful waterfalls in Iceland. Located in the Þjórsárdalur valley in South Iceland, close to the famous Golden Circle route, Háifoss is a great stop when exploring this tourist route.

If you’re keen on adventure, Háifoss waterfall is definitely worth checking out. At 122 meters tall, it’s one of the tallest waterfalls in the country.

Beside Háifoss waterfall, you will find another beautiful waterfall, the Granni. When you make it to the top and stand above these two waterfalls, you’ll be treated to views that are almost unbelievably beautiful. The trek to the top does not come easy, but the landscape spread out beneath you makes it well worth the climb.

Brúarárfoss is located between the hot spring area of Geysir and the charming village of Laugarvatn. If you’re driving, you can park your car at a small parking lot by the Brúará river, but we’d recommend getting here early in the morning to ensure you find somewhere to park.

In many ways, the Brúarárfoss waterfall is very different from the other waterfalls in Iceland. Its water comes from the river Brúará that runs wide above the waterfall, then cascades into a narrow crack in the middle of a riverbed. The crack gets a little wider further down until it takes in almost all the water that comes down from the river.

While the waterfall is only 5 metres tall, it’s still worth visiting because it looks very photogenic.

Dynjandi, also known as Fjallfoss, is a beautiful waterfall located in Iceland’s West Fjords. Cascading at 100 metres, it’s 30 metres wide at the top and widens up to 60 metres at the bottom. Take time to visit some of the smaller waterfalls below the Dynjandi, which you will pass by on the way to the main attraction.

Getting to the Dynjandi waterfall requires a 15-min hike. It’s quite an effort to get to the place, but the route is very scenic. When you get to the top, you’ll be rewarded with some seriously stunning views.

Trekking to the Hengifoss waterfall could take up to an hour from the parking lot. However, the route is very picturesque, leading you to the Litlanesfoss waterfall, where you will find remarkable basalt stone columns. The trail is a bit steep, but it’s well-marked.

Hengifoss is in East Iceland, located within the Vatnajokull National Park. The best time to visit is in summer when its serene beauty offers the perfect opportunities to take great photos.

Iceland is famous for its natural landscapes, from stunning glaciers to majestic volcanoes. But what makes the waterfalls in Iceland truly spectacular is that they feature a unique combination of natural elements where a massive amount of water flows from its impressive cliffs surrounded by jagged volcanic landscapes. So, if you’re heading to Iceland for a holiday soon, make sure you visit at least one of these waterfalls.

Many of Iceland’s waterfalls are easiest to reach by car, which is why so many visitors to the country choose to hire a vehicle when they visit. If you’re planning a trip to Iceland and want to find out more about outstanding vehicle rental options, get in touch and speak to one of the team at Fara Car Rental for more information.